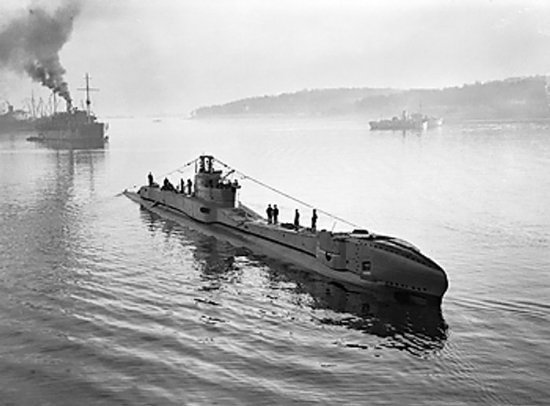 The British T-Class H.M.S. Thetis submarine was built by the Cammell Laird & Company, Birkenhead, England as on of the first of the 53 T-Class subs. Laid down on December 21 1936, she was part of Group 1 of the T-Class. Construction was finally completed on June 29 1938 and the first trials were delayed due to the jamming of the forward hydroplanes. After the issue was fixed, the trails started in Liverpool Bay with Thetis under the command of Lt. Commander Guy Bolus. On June 1 1939, Thetis left for Liverpool Bay for it's final diving trials and was escorted by the tug boat "Grebe Cock." In this trial, she carried the normal personnel complement of 59 men, but she was also carrying personnel from the Royal Navy and from Cammell Laird, in total, 103 men. At 14:00 the same day, Thetis sunk after a malfunction with the 5th torpedo tube, the inner and outer doors of the tube were open and the seawater quickly flooded the bow of the boat, causing it to sink 150 ft below the surface. In the chaos, an indicator buoy was released and a flare was fired to signal for help. By 16:00, the crew of the Grebe Cock became concerned for the safety of the Thetis and sent a radio message to the H.M.S. Dolphin sub stationed at Gosport for assistance and a search was started immediately. They found the stern of the Thetis was still above water but only three men from the Royal Navy survived. Lt. Frederick Woods (torpedo officer), Captain Harry Oram and Leading Stoker Walter Arnold and a man from Cammell Laird, Fitter Frank Shaw were the only ones who escaped of the 103 aboard. The other 51 crew members, 26 Cammell Laird employees, 8 naval officers, 7 Admiralty overseeing officers, 4 Vickers-Armstrong employees, 2 caterers and a pilot from Mersey were killed. The four survivors were found by the the destroyer "Braze," which joined in the search for the Thetis. The only way for the crew to escape from this vessel was to go in the escape chamber that could fit only one man at a time. The pressure outside the submarine was greater than the pressure inside the sub. To equalize this, the escape chamber was flooded with the person inside it, once the water filled in, the outer door could be opened. The four survivors were the men who went through this successfully, the 5th person who tried to get out panicked and opened the outer door too early, the rush of water drowned the man and with the outer door open, the others still inside the Thetis were trapped. The 98 others eventually died from carbon dioxide poisoning, increased atmospheric pressure. But the sub wasn't fully sunk, it could be salvaged. The job to salvage the sub was given to the Liverpool & Glasgow Salvage Association and the bell from the Thetis was presented to the company by the Admiralty. But the salvage itself came at a price, on August 23 1939, Diver Petty Officer Henry Otho Perdue died from "The Bends" while raising the Thetis. On a Sunday, September 3 1939, the sub was intentionally beached ashore at Traeth Bychan, Anglesey. Poland was currently being invaded by Germany and the Soviet Union. England was about to be at war against the Axis.

Eventually, Thetis was fully repaired and recommissioned in 1940 as H.M.S. Thunderbolt under the command of Lt. Commander Cecil Crouch. The sub was given a second chance of service and for the next 18 months, she patrolled the Atlantic Ocean and the Mediterranean Sea. On December 15, while on patrol in the Bay of Biscay, Thunderbolt sunk the Italian sub "Capitano Raffaele Tarantini." In the Fall of 1942, Thunderbolt and her two sisters, "Trooper," and a 1940 built T-Class sub "P311" were converted to carry two "Chariot" manned torpedoes and fitted with the crews to operate them. In their first mission with the Chariots, Operation Principal in December 1942, the three subs were taken back to the Mediterranean. The Thunderbolt's target were the transports in Cagliari but no ships were hit and the operation was a failure. P311 was lost at La Maddalena. The second mission took place at the harbor of Palermo in Jan 1943. On the 2 and 3 of Jan, the Chariots were launched and entered the harbor and mined the ships anchored there. The operation ended successfully with the sinking of the light cruiser "Ulpio Traiano and the S.S. "Viminale." A third mission tool place at the harbor of Tripoli on the 18th of January. The objective was to prevent the Axis warships blockading the Tripoli harbor, which was about to be occupied by the British Eighth Army. On February 20 1943, while on patrol, Thunderbolt shelled the Albanian sailboat "Villanzen Veli" off Bari. The sub was forced to dive after an Italian auxiliary crusier "Brindisi," and a coastal battery fired at her. The sailboat made it with only light damage. March 14 1943, the Italian corvette "Cicogna" detected the Thundebolt and dropped depth charges at the sub. The Thunderbolt sunk with all hands lost and settled to the bottom in 1,350 meters of water off Sicily. 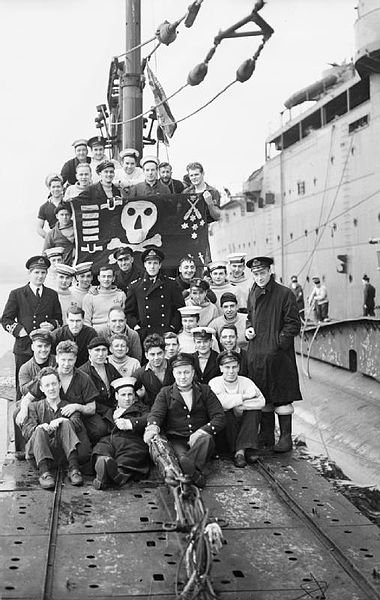 March 27 1942. Lt. B.J. Andrew (center) with the crew of H.M.S. Thunderbolt and their Jolly Roger flag. The crew just returned from the Mediterranean Sea to the Submarine Depot Ship H.M.S. Forth in Holy Loch, Scotland. IWM A-8456