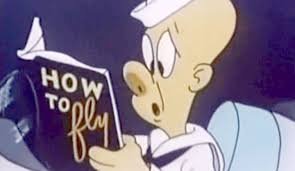 Mr. Hook was the main character of an American propaganda cartoon series of the same name. Mr. Hook was designed by Hank Ketcham, the creator of “Dennis The Menace” comics and served to encourage servicemen to buy war bonds. Although only four short films are known to have been made, it served a huge role in the war bond drives.

In 1943, Walter Lantz Productions, under the supervision of the Bureau Of Aeronautics, made the first and only colorized short film of this series called “Take Heed, Mr.Tojo!” It took six weeks to finish the short film, however, the United States Navy found the effort well spent. The short helped more Navy personnel to buy war bonds than any other war bond project. The three later films were made in black and white by Warner Brothers in 1945.

After the war was over, the films were thought to be lost but eventually, they were found and saved by Cameraman Norman Hatch who filmed the battles of Tarawa and Iwo Jima.

To Watch these, go to the Theater page and click on the "Mr.Hook" button!