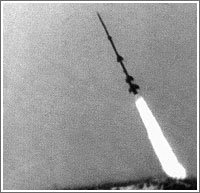 (Rheinbote one second after launch, 1944)

(Click the video to watch footage of the Rheinbote)

The Rheinbote or V4 were designed by Director Klein and Dr. Vuellers at the Rheinmetall-Borsig as a means to replace the hard to transport heavy artillery. It was first developed in 1943 as a four-staged solid-fuel rocket. The Rheinbote was 37.5 feet long, with a set of fins for each stage. It was powered by a Diglycol Dinitrate mix which allowed it to reach 4,200 mph, the fastest speed for any rocket at that time. The Rheinbote was also able to reach the height of 256,000 ft or for an effective range, 99 miles. Removing some of the stages of the rocket allowed for shorter ranges. Like the Rheintochter, the Rheinbote was launched from a converted 88mm Flak 41 mount but in some cases they were also launched from a Meillerwagen, used for transporting the infamous V-2. 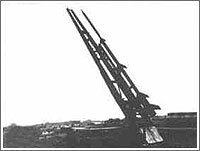 The first tests were done in 1943 at the Blizna Test Range in Poland. It was found that the rocket flew excellently. The large first stage of the rocket had six boosters, same ones used from the Rheintochter-1 rockets, but they only fired for one second. That one second delivered 83,775 pounds of thrust, then the stage was detach and land about two miles from the launching site. The second stage had the same thrust but would land around seven miles away. The third stage also had the same thrust but would land around fifteen miles from the launch site. The fourth stage had a slightly lower thrust, but it was also attached to the 88 pound warhead. By now, the fourth stage was traveling one mile per second. The warhead produced no fragments up detonation and made craters only 4.9 feet across and during testing, the craters were very hard to find. Because of the small warhead and inaccuracy, it was not a feasible weapon of war. But SS-Obergruppenführer Hans Kammler ordered the operational use of the Rheinbote. Various accounts claim between 20 to 200 Rheinbotes were fired from the Dutch city of Zwolle toward Antwerp in November 1944, causing little damage to the city. In January, another 60 are said to be fired at Antwerp but again with very little damage. From there the project was canceled even the plans for the more advanced Rheinbote-2 and 3.

After Germany's surrender, the Soviets grew interested in the Rheinbote and on May 31 1945, Stalin signed Decree No.8897ss. All equipment, blueprints and examples were confiscated from Rheinmetall and studied. The Soviet later claimed the Rheinbote was a failed experiment and was a terrible design. The Rheinbote ended without ever being used for it's intended role but rather much like the more successful V-2. 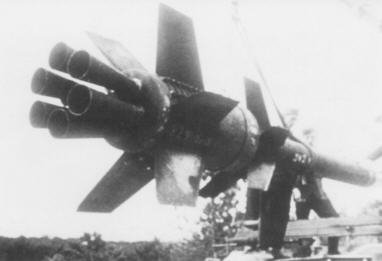 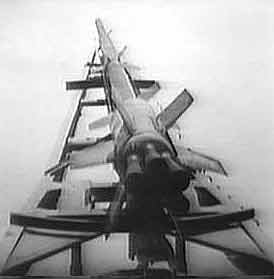